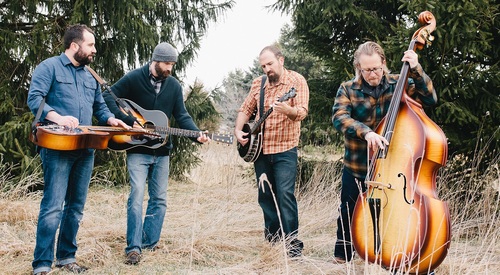 Southeast Michigan quartet Cold Tone Harvest is no stranger to the slow burn. Even the name evokes the reflective, stock-taking wistfulness of a midwest autumn, but strangely devoid of the warmth savoured in the browns of falling leaves and the rich orange sunsets that soothe us into winter. The paradoxical name proves itself uncannily fitting, as expertly delivered Americana tropes and soundscapes gradually crack at the seams, revealing a shimmering sliver of something else entirely. Country-infused melodies and rhythms lace with a lush ambience often reserved for the loneliest of instrumental compositions. Rich and rugged baritone vocals, clearly suited to whiskey songs and heartache anthems, instead turn their howls and growls towards brave and poetic lyric territory rarely found in a common folk or bluegrass outing.

The ensemble was originally formed by softspoken singer/songwriter Andrew Sigworth, partnered with drummer and banjo-player Brian Williams. Even in the project’s early stages, Williams advocated for a sonic landscape built around Sigworth’s voice as centerpiece, often modifying his percussion kit and playing techniques away from convention to allow more space. The addition of inimitable upright bassist Ozzie Andrews gave the music a rowdy drive. The ensemble was completed with the addition of guitarist and vocalist Tony Pace, whose dobro, lap steel, and electric work adds a dense and mournful expanse to each song.

Cold Tone Harvest rides a rare and beautiful line, delivering a wall of sound that will grab the ear of the rowdiest music festival enthusiasts, partnered with the textual eloquence and deeply layered arrangement that begs for solitary repeat listens.”

This event has been brought to our community in part by the generous contribution from: Peninsula Title Agency