Crystal Theatre is digging into the rich deposits of local talent and bringing talented artists from our neighborhoods to a new audience in a full concert format.  The third Thursday of the months will feature one or more artists of similar styles and musical genres.

On Thursday, October 21 at 7 p.m., Sons of Legend takes the stage.  Thanks to “The Legend,” rhythm guitarist Harley Davis Sr., Sons of Legend is influenced heavily by the blues, as well as hard rock/metal, southern rock and outlaw country.  The Sons include Jay Davis and Chris West on lead guitar, Harley Jr. on rhythm guitar,  Kirk Atanasoff on drums, Russ Fennick on bass and veteran blues harp player Rick Bailey.  Jay, with his gritty rock style, and Rick, with his soulful blues style reminiscent of great blues musicians of the deep south, take turns singing lead.   The combination of these influences as well as the diversity of the musicians produce a raucous yet fluent merging of those styles into something uniquely called Sons of Legend. 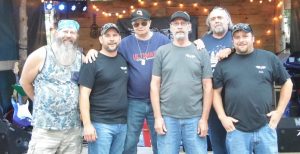 Third Thursday will be taking a break over the hunting/holiday season and return in January.

To suggest local musicians that you would love to see as part of the Third Thursday series please email info@thecrystaltheatre.org.

No advance tickets for this event. Tickets will be available at the door $10 adults, $5 students