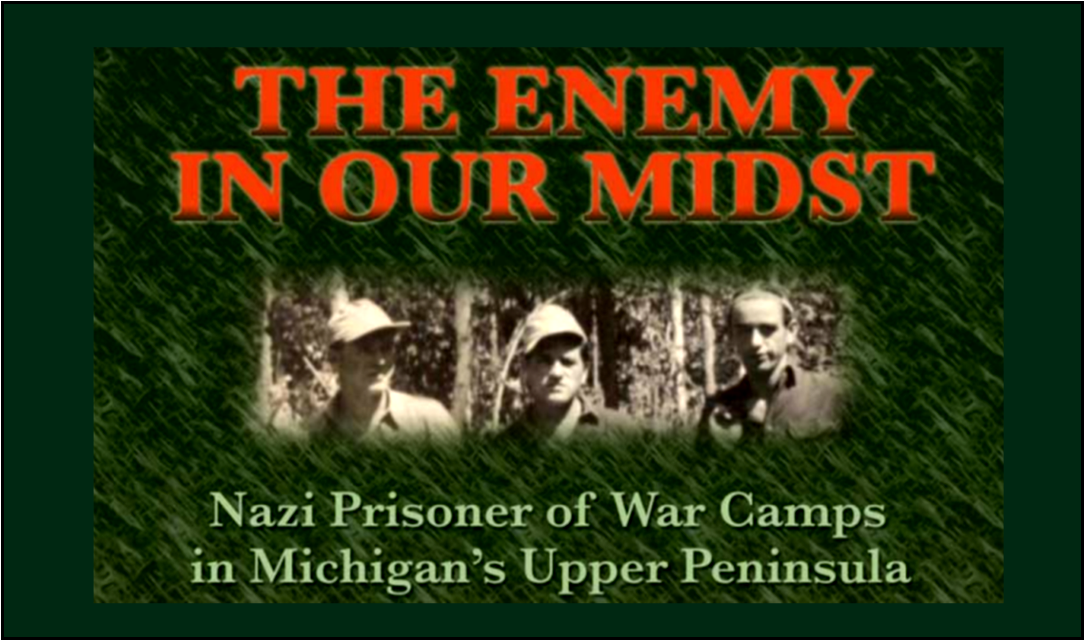 Across the United States, there were about 375,000 German POWs at more than 655 camps. But, unknown to many, from 1944-46, roughly 1,100 German prisoners of war were held in the remote north woods at five prisoner of war branch camps in Michigan’s Upper Peninsula.  Despite these staggering numbers, sixty years after the fact, the story of their captivity remains largely untold. From 1944 to 1946, the German prisoners called five POW camps in the Upper Peninsula home: Camp AuTrain and Camp Evelyn in Alger County, Camp Raco in Chippewa County and Camps Sidnaw and Pori in Houghton County. Brought in under a cloak of secrecy by the U.S. Army, the prisoners eventually encountered local residents, who were reluctant to accept the POW’s.

Featuring a Q&A and personal introduction of the show, producer John Pepin of Ishpeming will be joining us for the evening. The Enemy in Our Midst documentary, locally produced by Jackie Chandonnet and John Pepin, first aired on WNMU Public TV 13 in August 2004. It tells the story of the U.P.’s POW camps in great detail, capturing an aspect of WWII history that many feared would fade into obscurity without being recorded. The project, which took two years to complete, contains many scenes shot throughout the Upper Peninsula. “Our filmmaking was a race against the clock,” Pepin said. “We tried to capture this story before those able to tell first-hand accounts of the historical events passed on.”

Also included in the 161-minute documentary are hundreds of historic photos, vintage film and interviews with local residents who had encounters with the POWs. In addition, the program features reenactments by local actors, area singers and musicians. Chandonnet and Pepin both host the program.  “From what we can tell, not many people in the Upper Peninsula even know there were German prisoners in this area,” Chandonnet said. “It’s an unknown story that we felt should be preserved.“

Admission is by donation, and split with the U.P. Honor Flight

For an “Enemy in Our Midst” viewer guide featuring color photos, background information, history articles and other resources, click here. Viewing guides will also be available at the event.

For an 18 page PDF containing the original Mining Journal articles that inspired the documentary, which includes five articles by John Pepin, photographs and a list of sources, click here.