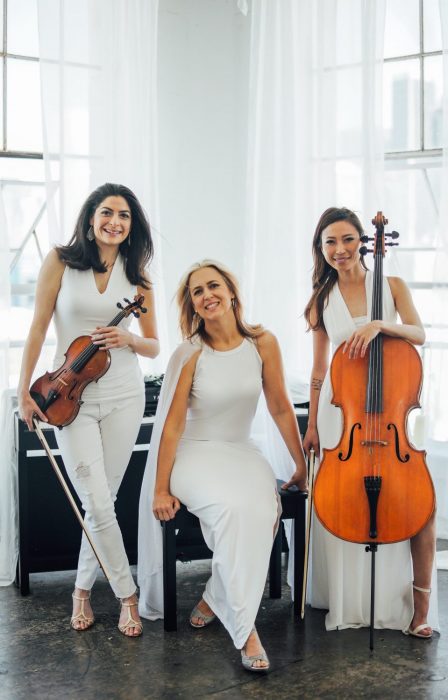 With a flair for the wild and unexpected, the genre-bending trio, Take3, brings the refinement of a rigorous classical background and mixes it with rock star charisma. Whether performing their take on pop, jazz, or classical tunes, they bring enthusiasm to their interpretations and impart their love of music to audiences of all musical preferences.

Their rigorous classical training at Colburn School and The Juilliard School has ignited their passion for musical exploration and is aiding them in revolutionizing the piano trio experience. Take3 is known for their adrenalized performances of classical, movie, tango, pop and oldies music, live on stage, as well as through their dynamic music videos. They are fervently seeking new ways to heighten their audience’s concert experience by using technology, multimedia, and collaboration with guest artists. They will be joining the Allied Concert Series Roster for 2019-2020 season and will also be engaged with orchestral and chamber concert series throughout the U.S.

Take3’s fan base continues to grow around the world through each individual’s solo, chamber and orchestral engagements, such as violinist, Lindsay Deutsch’s solo engagement, touring with Yanni. Their mission is to connect with fans around the world and impart their love of music to audiences of all ages and musical preferences. They will be releasing new music videos this Fall and will be releasing their trio album in 2019-2020. Members have appeared in major music venues such as Disney Hall, Carnegie Hall, Alice Tully Hall, Radio City Music Hall in New York, Venice Performing Arts Center and the Greek Theater in Los Angeles.