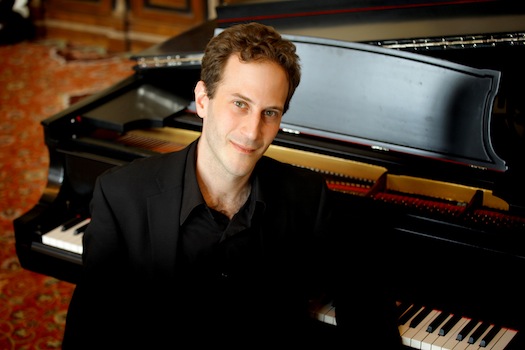 Praised as “intrepid” (Philadelphia Inquirer), “engaging” (Houston Chronicle), and “endlessly fascinating” (WQXR New York), pianist Michael Mizrahi has won acclaim for his compelling performances of a wide-ranging repertoire and his ability to connect with audiences of all ages. He has appeared as concerto soloist, recitalist, chamber musician, and teaching artist across the United States and abroad.

The Crystal Theatre welcomes pianist Michael Mizrahi and an ensemble of gifted musicians on Sunday, September 9 at 2:00 pm CST presenting Michael Mizrahi & Friends: A Tribute to Leonard Bernstein.  Bernstein was a world-renowned conductor of major orchestras, passionate advocate of music education, and composer of some of the most beloved scores of the 20th century.  He would have turned 100 on August 25, 2018. An international celebration of his musical legacy comes to Crystal Falls this September, with performances of several works by (or inspired by) Bernstein. Acclaimed pianist Michael Mizrahi leads an ensemble of musicians in a program featuring music from West Side Story, Candide, Mass, and much more. Joining Mr. Mizrahi are Dane Richeson, percussion; Erin Lesser, flute; Steven Spears, tenor; and Anthony Padilla, piano.

Mr. Mizrahi has performed in the world’s leading concert halls including Carnegie Hall, Toyko’s Suntory Hall, the Kimmel Center in Philadelphia, Jordan Hall and the Gardner Museum in Boston, the Kennedy Center in Washington, DC, the Chicago Cultural Center and Houston’s Jones Hall. He has performed as soloist with major orchestras including the Houston Symphony, National Symphony, Haddonfield Symphony, Sioux City Symphony, and Prince Georges Philharmonic.

Dedicated to the music of our time, Mr. Mizrahi has commissioned and given world premieres of several new works for piano and frequently collaborates with composers and instrumentalists in the performance of 21st-century music. He is a founding member of NOW Ensemble, a chamber group devoted to the commissioning and performing of new music by emerging composers. Mr. Mizrahi was a founding member of the Moët Trio, which performed in major venues across the United States and Canada and established itself as one of today’s most exciting young piano trios.

Mr. Mizrahi is also a member of Decoda, a chamber ensemble comprised of virtuoso musicians, entrepreneurs, and passionate advocates of the arts. Based in New York City, Decoda creates innovative performances and engaging projects with partners around the world. Mizrahi teaches each summer at the prestigious Decoda Skidmore Chamber Music Institute.

Michael Mizrahi holds master’s and doctoral degrees from the Yale School of Music, where he studied with Claude Frank. He is currently Associate Professor of Piano at the Lawrence University Conservatory of Music in Appleton, Wisconsin.

Steven Spears, tenor, is noted for being “most consistently musical, most clear in diction,” possessing a “stunningly beautiful, edgeless tenor” and for “lustrous singing,” tenor Steven Paul Spears has performed with many arts organizations across the United States and Europe. Specializing in works of the Baroque and Contemporary Periods, Steven’s recent repertoire includes of works of Rameau, Cavalli, Monteverdi, Bach and Handel, as well as Britten, Stravinsky, Orff and Ullmann. Of his singing, reviewers have said Steven brought out “one reason why Bach’s vocal melodies have such complex, searching contours; they’re tracing not just musical thoughts, but also the changing weight and implications of the text,” giving a performance “so true to the words” and of a performance of the Roasted Swan in Orff’s Carmina Burana, one critic wrote that it was “riveting…filled with angst and an overabundance of high notes, Spears dramatized the moment with vocal dexterity and polish.”

Erin Lesser, flute, as a soloist, and chamber musician Erin has been described in The NY Times as “superb”, “excellent”, and “elegant”. She has travelled to prestigious venues around the world including Carnegie Hall, Walt Disney Hall, and Alice Tully Hall where she performed the American premiere of Morton Feldman’s concerto For Flute and Orchestra with the Jancek Philharmonic. Erin is a member of the critically acclaimed ensemble Alarm Will Sound, and the Wet Ink Ensemble. She is also a founding member of the Argento Chamber Ensemble and the Due East flute and percussion duo. An alumna of Ensemble Connect, she now performs with Decoda, the affiliate ensemble of Carnegie Hall. As a recording artist, Erin can be heard on Nonesuch, Cantaloupe, Carrier, Hat[now] Art, New Focus, Aeon, New Amsterdam, New World, Albany and Capstone Record labels.  Erin is associate professor of flute at Lawrence University and a Pearl Flute Performing Artist.

Anthony Padilla, is a professor of piano and chamber music at the Lawrence University Conservatory of Music in Appleton, Wisconsin. Padilla receives public and critical acclaim for performances of “enormous freshness, vitality, and poetry” (Chicago Tribune) After his New York debut recital, the New York Concert Review called him “a strong-willed, steel-fingered tornado:  he plays the piano with absolute authority and gives new meaning to the idea of ‘interpretation’ to the extent that the U.S. Patent Office might well grant him a number. Nobody could copy him.”  A protégé of the legendary pianist Jorge Bolet at the Curtis Institute of Music, he completed his graduate studies at the Eastman School of Music, where he served as teaching assistant to Jeffrey Kahane and Natalya Antonova. Awarded the prestigious Beethoven Fellowship by the American Pianists Association and top prize at the Concert Artists Guild International Competition, he is also a laureate of the Naumburg, Bachauer, Kapell, and Cleveland International Piano Competitions. He is a founding member of the Arcos Piano Trio, which was recently awarded an Artistic Excellence grant from the National Endowment for the Arts to commission and record chamber works by Latin American composers.

Dane Richeson is Professor of Music at Lawrence University Conservatory of Music in Appleton, Wisconsin, where he has been Director of Percussion Studies since 1984. He is recognized as one of the most versatile performers in the percussive arts. Throughout the world he has been featured in such diverse roles as solo marimbist, contemporary chamber music percussionist, world percussion specialist and jazz drummer. Performances have been with such diverse artists as Bobby McFerrin, Gordon Stout, Nancy Zeltsman, Gunther Schuller, Geoffrey Keezer, Joe Lovano, NDR Big Band of Germany, Roscoe Mitchell, Medeski-Martin-Woods, Kenny Wheeler, Danilo Perez, and Lyle Mays. He has performed extensively with a variety of contemporary chamber ensembles and has been a featured marimba artist/teacher at several of the Zeltsman Marimba Festivals, the Ivana Bilic Marimba/Percussion Week in Croatia, and the Central Conservatory Chamber Music Festival in Beijing. Moreover, he has performed at festivals such as Ravinia, North Sea Jazz Festival, Montreux Jazz Festival, and Beijing Music Festival. In addition, Dane has lived and studied music traditions in Ghana, Brazil, and Cuba.