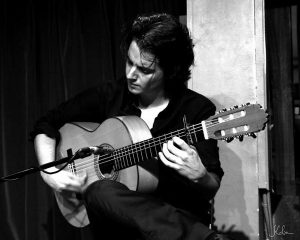 From the director of the Pine Mountain Music Festival, “I stumbled upon this show when I was travelling in the South of France and Spain.  I saw a poster on the little theater and got one of the last tickets available for that night.  The audience clearly knew what was coming, not that they were expert in flamenco, but they knew the local teacher whose show they awaited every year.  A single guitar and a cajon player accompanied her.  Other than this little gypsy band, she was alone on stage.  I thought of Bobby McFerrin the first time I saw him, totally alone on stage with only a microphone.  But what variety!  I learned that within the genre of flamenco music there are a number (about 25)  important rhythms that correspond to different dances — Bulerias, Fandango, Tientos, Tangos — one where the dancer kicks her long train high, revealing her boots which can alternately go crazy or seductively create a story.  And then there is the upper body, the port de bras, in ballet language, what the arms do, but, like hula, how the hands tell a story of their own.  And then there is the highly seductive various uses of castanets and the palmas, rhythms created with hand claps, that are more elaborate and difficult than they seem; in short, it is a highly complicated dance form that leaped out of a Gypsy campfire and took over the world.  This is what we will experience in the Crystal and Calumet Theatres, carefully chosen for the soul in the boards of those stages.” 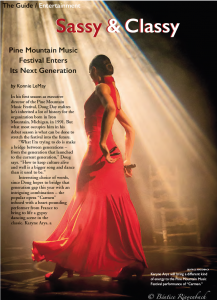 Karyne ARYS is a flamenco dancer in Bordeaux at the Théâtre Trianon.  As choreographer and solo dancer she has consistently created an original work every year including, notably, SOL, Sound of an Origin, Faraway, KALOS, Beauty to Sublimate Reality (presented at the Mont-de-Marsan Arteflamenco Festival), TEMPS FLAMENCO and ALMA FLAMENCA and this year the Tablao, LETRAS.  As a young dancer Karyne was a First Prize winning ballet dancer at the Orléans National Conservatoire, and also won acclaim as dancer/choreographer in Paris for her modernistic interpretation of folk dances.   Karyne has studied flamenco in Sevilla with Mario MAYA and in Madrid where she emerged as a professional dancer with the prestigious Merche ESMERALDA Company, touring Spanish Andalusia and developing an appreciation for the history of gypsy influence in authentic flamenco music and dance.  She teaches and runs Le Studio Flamenco in Bordeaux.

Non Gem Event: These events are outside of our regular Gem Season. Gem Season Passholders can receive their discount by entering the code from their Season Pass.