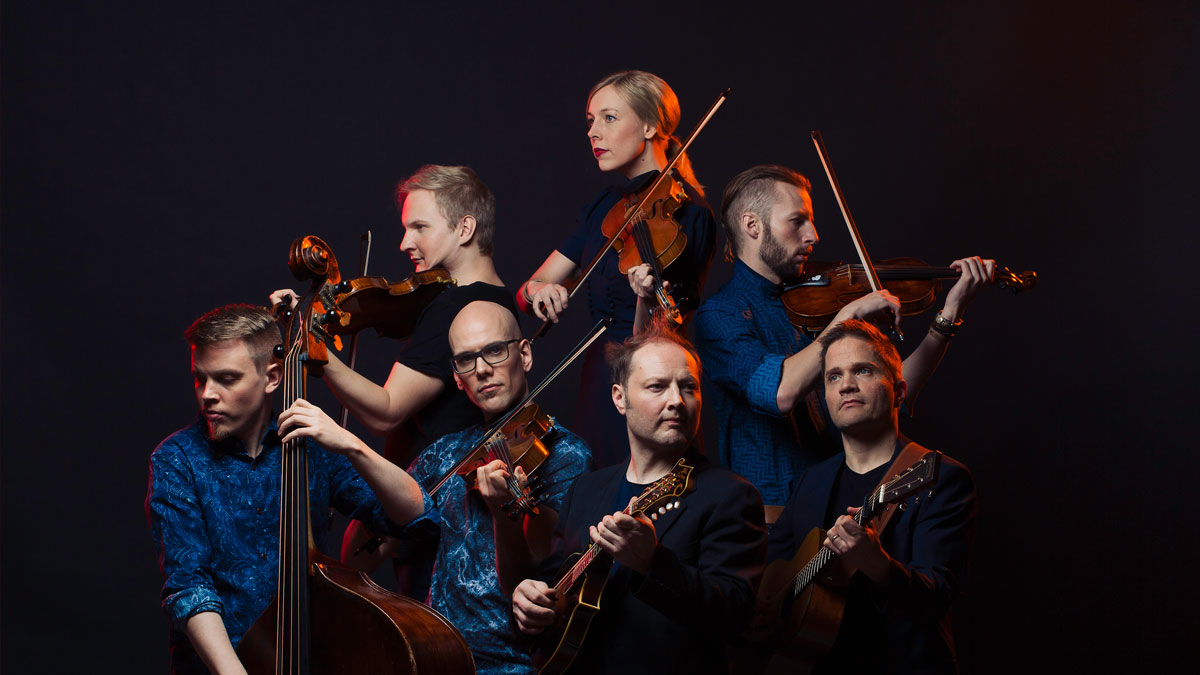 Frigg, a multi-talented Finnish-Norwegian group of Seven young musicians who play fresh Scandinavian folk fiddling accompanied by fretted instruments, upright bass and endless energy will take the Crystal Theatre stage Tuesday, April 24 at 7:00 pm CST. Known for their captivating takes on traditional Polskas, their energy and their immaculate, finely crafted phrasing. The style they represent is a mixture of Kaustinen (Finland) and Nord-Trondelag (Norway)-traditions flavored with a taste of Americana and Irish folk music.

…all their virtues: living dangerously, taking harmonic liberties,
infecting the listener with the Finnish equivalent of the bit of a tarantula and
making them weak with a deep Nordic melancholy.   – Songlines Issue 132.

“The band flies, in a mix of traditional and their own tunes, all shapely,
ingenious and delivered with acute mastery and massive swing and energy.” – Roots

Frigg has been conquering the world with a fusion of western folk music styles leaning strongly towards Nordic folk music, for which the world music media has coined the term Nordgrass, referring to the bluegrass influences of the group. The tight interplay of four violins, string instruments and contrabass, fine-tuned to perfection and spiced with sparkling, humorous live-energy has made an impact on listeners all over the world.

Apart from countless European tours, the notches on Frigg’s collective belt include seven North American tours. Many well-known festivals have been marked on their extensive tour map. For example, Celtic Connections, WOMADelaide, Rainforest World Music Festival and Cambridge Folk Festival have all invited the group over for a performance – and the list of festivals could go on endlessly. Via TV and radio, Frigg has reached audiences of millions with their performances in A Prairie Home Companion live radio show and NHK World Japan channel’s El Mundo program.

During its existence Frigg has released seven albums. The last studio album “Polka V” from 2012 was chosen as the folk music record of the year and a Teosto Prize nominee in Finland. Among the most notable world music publications Songlines has singled out two of the group’s albums for its “Top of the World” chart, and on top of that fRoots, SingOut! and Rhythms have drawn attention to the group several times with extensive features and praising reviews.

In 2017, the eighth albums by Frigg, “Frost on Fiddles”, has seen the light of the day. The originally Finnish-Norwegian group has now become wholly Finnish, but Nordic influences remain strong. The delicate and beautiful Scandinavian tone language has been dipped in BBQ sauce and it is being served fresh with pálinka (a traditional fruit brandy in Central Europe), to be enjoyed in good company. Frigg is proudly its own entity, now more so than ever!

This is a return visit for Frigg, who last played to a full house at Crystal Theatre in 2002. Advanced tickets are available on-line through Facebook or TheCrystalTheatre.org, and at the Iron County Chamber of Commerce and Ben Franklin’s of Crystal Falls, Steamin’ Joe’s in Florence, The Music Tree in Iron Mountain. – $15 in advance, $18 box-office, $10 with a Gem ‘18 Season Ticket, $5 students.

Non Gem Event: These events are outside of our regular Gem Season. Gem Season Passholders can receive their discount by entering the code from their Season Pass.