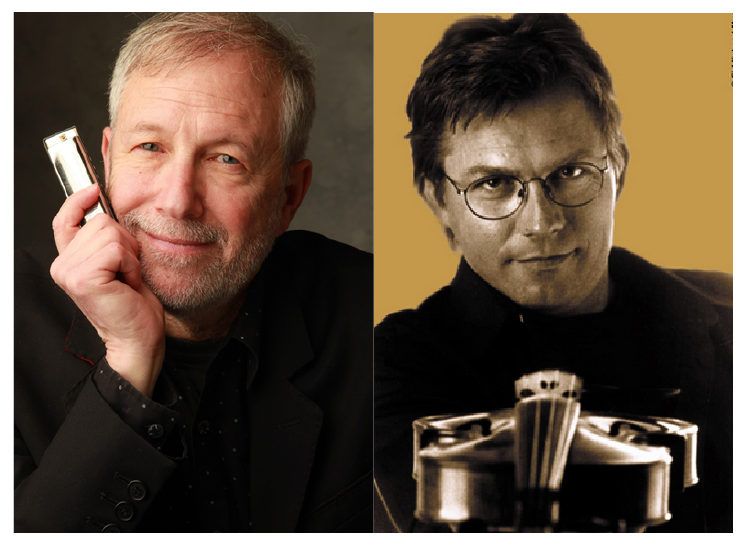 Corky is known internationally as one of the world’s great blues harmonica players, blues pianist, singer-songwriter. Randy Sabien is a bluesy, rockin’, swingin’, funky, jazz violinist. With an intensely rhythmic, vibrant and inventive style. Together, purling and twisting and chasing, you will lose yourself in a tapestry of sonic joy.

Chicago Blues Hall of Fame and Lifetime Achievement awarded music legend Corky Siegel and Jazz violin virtuoso Randy Sabien are back on tour.  Blues harmonica ace, pianist, and vocalist, Corky Siegel is, of course, the award-winning composer who, at a very young age, learned his craft at the feet of such legendary first generation bluesmen as Muddy Waters and Howlin’ Wolf and as a part of the Siegel-Schwall Band. As an influencer with his Chamber Blues, he is credited with moving the blues from smokey clubs onto the classical concert stage and obliterating musical categorization in the process.  Corky Siegel’s newest Chamber Blues release “Different Voices,” received DownBeat Magazine’s Editor’s pick for best of 2017 calling Corky a “National Treasure.”  Jazziz Magazine says Siegel has created:   “A significant step forward into new dimensions of feeling, content and technique.”

Randy Sabien is a 25 year alum of Garrison Keillor’s popular weekly radio show, “A Prairie Home Companion.” At the age of 21, he founded and chaired the renown Berklee College of Music’s Jazz String Department, and authored text books and teachers manual series Jazz Philharmonic, published by Alfred Publishing. In addition to jazz violin, Randy is a wiz on piano, guitar, mandolin, and vocals.

Corky Siegel and Randy Sabien together create a dazzling evening of extraordinary music reinterpreting Jazz standards and Blues classics, while also offering their own original compositions and interpretations. They are masters of musical mirth, and each has penned hundreds of uniquely entertaining songs combining clever comedy and craft.

Here is what critics have to say about Siegel and Sabien:

“Corky Siegel fuses entertainment and intellect. There is no doubting the talent of this brilliant performer.” – Chicago Tribune

Corky Siegel held listeners visibly spellbound with an amazingly eclectic musical style.  It verged on the avant grade, and recalled the sweet sounds of reggae with a healthy dose of Chicago style blues  – Chicago Tribune

Randy Sabien is a stellar virtuoso of Jazz violin, piano, and guitar.: “Listen closely to Sabien’s great cascades of notes, and you will hear the grand arpeggios, broken octaves, double-stops, trills, and tremolos that have marked classical violin playing since the solo work of J.S. Bach. But that’s just the starting point for Sabien’s art which bristles with the spirit of bona fide jazz improvisation. Rather than simply embellishing a tune, he reconcieves it, building and developing intriguing new musical motifs along the way.”– Chicago Tribune

One Wonderful Day: Celebrating 90 Years and Beyond Fortune Lake Lutheran Camp – RESCHEDULING FOR 2021